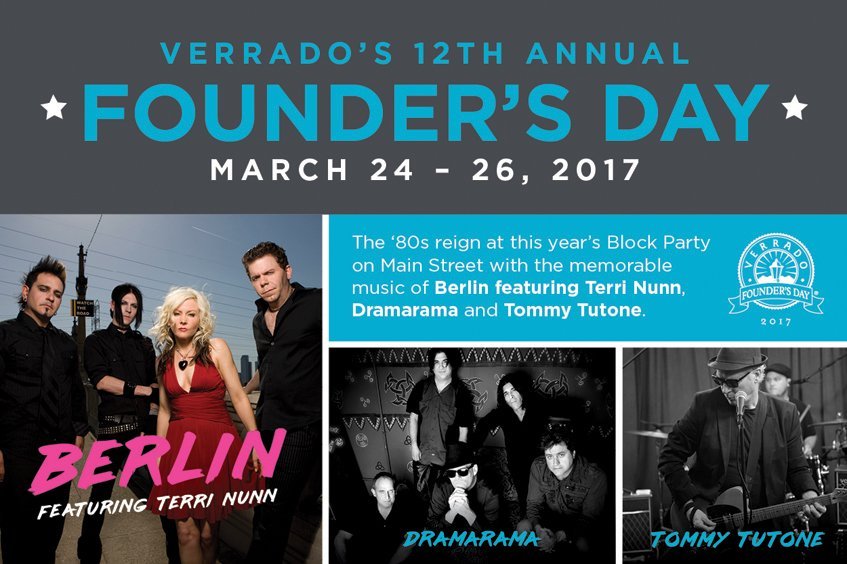 We are so amped about this year’s Founder’s Day Block Party with mad jams on the Village Green Stage. BERLIN featuring Terri Nunn, Dramarama and Tommy Tutone – we kid you not.

Originally an actress before BERLIN took off, Terri Nunn has appeared in several feature films, and was even considered at one time for the role of Princess Leia in Star Wars. But as fate would have it, Terri Nunn gravitated to her first love, music, and in recent years her ongoing influence earned her the #11 spot on VH1.com’s “100 Greatest Women in Rock.” While BERLIN has recorded seven studio albums of their own, a combination of 10 compilation albums, EPs and live albums round out an impressive discography that so far has yielded twelve gold and platinum album awards.

Alternative rock, power pop band, Dramarama, fronted by singer/songwriter John Easdale, will perform their ’80s anthem “Anything, Anything” and other hits “Last Cigarette,” “Work For Food” and “Haven’t Got A Clue.” The band has six critically acclaimed studio albums and a seventh in the works.

In the history of music, there are plenty of one-hit wonders, but none like Tommy Tutone. In 1982, Tutone exploded onto the music scene with one of the best-known songs in history. That song, which also sparked millions of prank calls, is none other than “Jenny/867-5309.” The song became a mega hit, and in later years, was covered by Everclear, Foo Fighters, Motley Crue, Green Day, Bracket, Crease, and the Goo Goo Dolls.

Don’t be lame. Mark your calendars for March 25. This Block Party is gonna be sick.