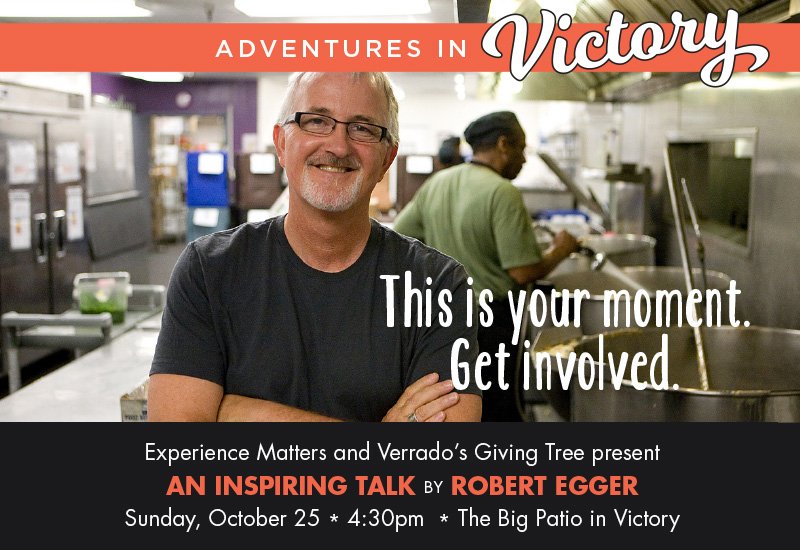 It only takes a minute or two of watching Robert Egger’s recent TEDx presentation to realize a few things:

1) Robert Egger is a pretty cool dude on a lifelong mission to help others.
2) It is 100% possible for all of us to make a difference by committing to small movements and contributions every day.
3) And, there’s no limit to the number of opportunities available to engage in causes and make an impact.

And while that’s always easier said than done, one thing is for sure: Egger has done it. He started humbly by helping friends serve the hungry in downtown D.C., then ambitiously opened D.C. Central Kitchen and L.A. Kitchen. He’s also the author of several books on non-profits and the food revolution. Egger has made it his mission to provide food for those in need while empowering everyone around him to make a difference through what he calls “relentless incrementalism,” the concept of making a small difference everyday. 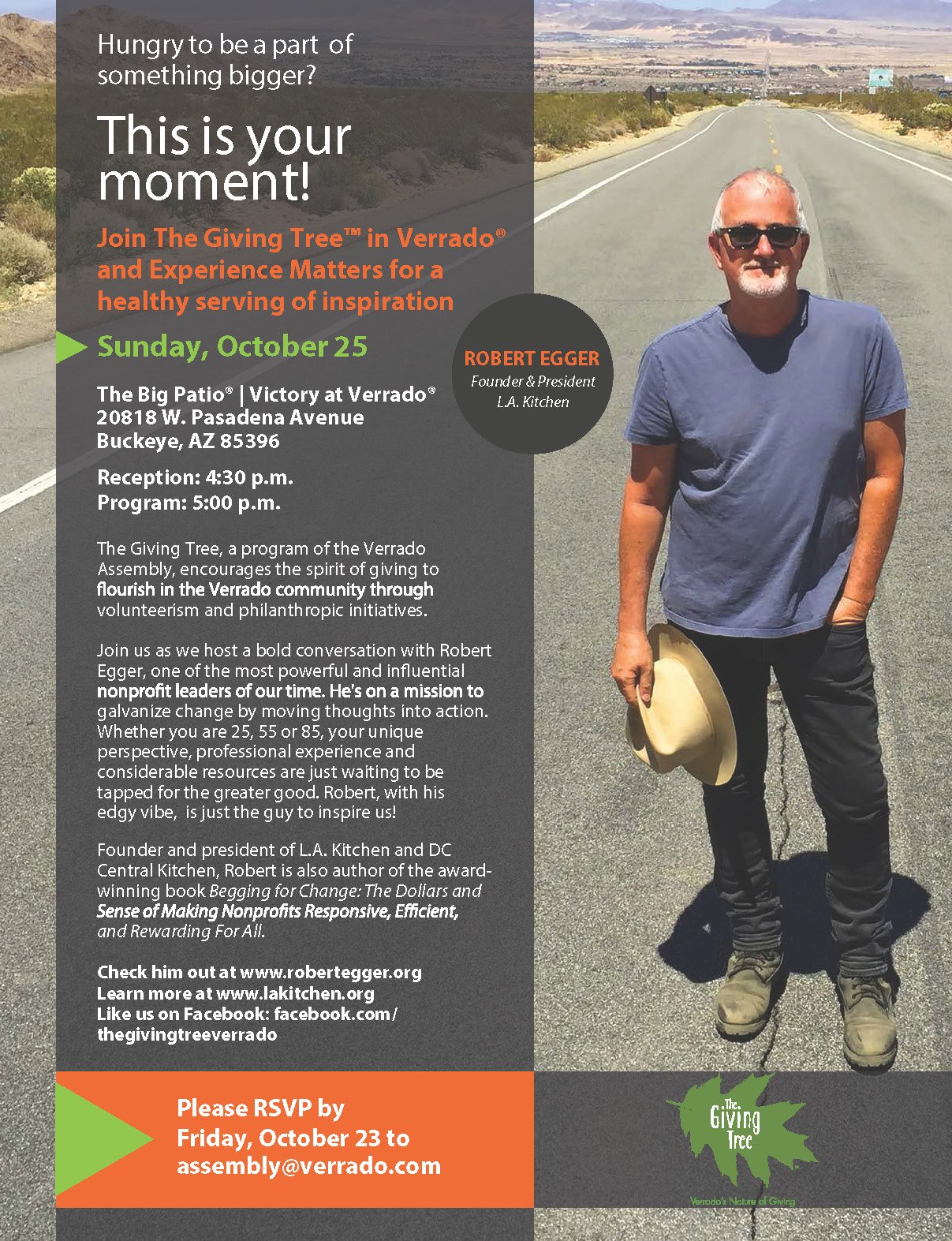 So it is with great anticipation that we invite you to join us for “This is your moment,” an inspirational talk by author and philanthropist Robert Egger on The Big Patio at Victory on Sunday, October 25 beginning at 4:30 PM. The event is free to all, and includes a reception from 4:30 to 5:00 with the program kicking off at that time.

We are also excited to share that the talk is being brought to you by The Giving Tree, a program of the Verrado Assembly that encourages the spirit of giving to flourish right here in our community.

Egger is a great fit for Victory too, because like our work with Experience Matters, he has a passion for tapping into the incredible amount of experience and capability that lies within the boomer generation. Or as he calls it, “Surfing the Silver Tsunami.” Perhaps more important is his call to bring multiple generations together for a common cause, working side-by-side to help meet the needs of our community. Sounds perfect for Verrado and Victory, don’t you think?

We hope you’re ready to get inspired. Please RSVP by email to Assembly@Verrado.com by Friday, October 23 to reserve your spot.

You can view the event flyer to the right, read more about Robert, and watch his TEDx talk below. See you on The Big Patio. 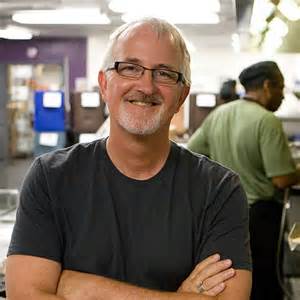 Robert is the Founder and President of L.A. Kitchen, which recovers fresh fruits and vegetables to fuel a culinary arts job training program for men and women coming out of foster care and older men and women returning from incarceration. He is also the CEO of Strong Food, L.A. Kitchen’s social enterprise business, which employs graduates of the L.A. Kitchen training program, and competes for food service contracts to serve healthy meals to seniors in Los Angeles.

Robert pioneered this model during his 24 year tenure as the President of the DC Central Kitchen, the country’s first “community kitchen”, where food donated by hospitality businesses and farms is used to fuel a nationally recognized culinary arts job training program. Since opening in 1989, the Kitchen (which is a $11 million a year, self-sustaining, social enterprise) has produced over 30 million meals and helped 1,500 men and women gain full time employment. The Kitchen operates its own revenue generating business, Fresh Start Catering, as well as the Campus Kitchens Project, which coordinates similar recycling/meal programs in over 45 colleges or high school based kitchens.

In addition, Robert founded or led numerous efforts (including The Nonprofit Congress and CForward) to rally employees of nonprofits to educate candidates about the economic role that nonprofits play in every community, and to support candidates who have detailed plans to strengthen the economy that includes nonprofits.
In Washington D.C., Robert was the Founding Chair of both the Mayor’s Commission on Nutrition and Street Sense, Washington’s “homeless” newspaper. Currently, Robert serves on the Board of the Los Angeles Food Policy Council, Phoenix Foods USA, the Philanthropic Collaborative, and Chef Jose Andres’ World Central Kitchen. He also serves on the Advisory Board for numerous social enterprise and food justice organizations, including Food Shift and The Food Recovery Network.

Robert’s book on the non-profit sector, Begging for Change: The Dollars and Sense of Making Nonprofits Responsive, Efficient and Rewarding For All, was released in 2004 by HarperCollins. It received the 2005 McAdam Book Award for “Best Nonprofit Management Book” by the Alliance for Nonprofit Management.

Robert was included in the NonProfit Times list of the “50 Most Powerful and Influential” nonprofit leaders from 2006-2009. He was the recipient of the Restaurant Association of Metropolitan Washington’s 2007 “Lifetime Achievement” award and the 2004 James Beard Foundation “Humanitarian of the Year” award. He has been named an Oprah Angel, a Washingtonian of the Year, a Point of Light, a Food Hero by Food Tank, a REAL Food Innovator by the US Healthful Food Council, and one of the Ten Most Caring People in America by the Caring Institute. He is also a 15-gallon blood donor to the American Red Cross.

Robert speaks throughout the country and internationally on the subjects of hunger, sustainability, nonprofit political engagement and social enterprise. He writes blogs and editorials to share his ideas about the nonprofit sector and the future of America.

For a taste of what you can expect, here’s a video taken from Mr. Egger’s recent TEDx talk in Venice Beach, CA.