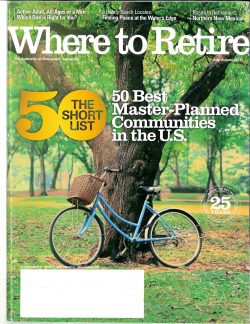 Where to Retire magazine (July/August 2017) has named Verrado one of the 50 best master-planned communities in the U.S. for 2017.

The Verrado community was also named to the magazine’s “short list” of best master-planned communities in 2015.

The Magazine noted noted trends that emphasize opportunities to engage and stay fit including trails, pools, gyms and golf as reasons to be listed among the “best of the best” in master-planned communities. Verrado and Victory have all that and then some.

With six restaurants, more than 72 neighborhood parks, over 75 clubs and groups, 21 miles of paths and trails, eight pools, two Tom Lehman golf courses and countless events and celebrations including four annual traditions, things are very active in our hometown.

It’s this collection of great little things that combine to make something even greater.

Bill and Diane Alford who moved from Seattle to Victory in 2015 for the dynamic lifestyle the community offers say, “We like the small-town atmosphere. We feel safe. It’s the friendliest community we’ve ever lived in. Rather than just being neighbors, it’s like we are family.”