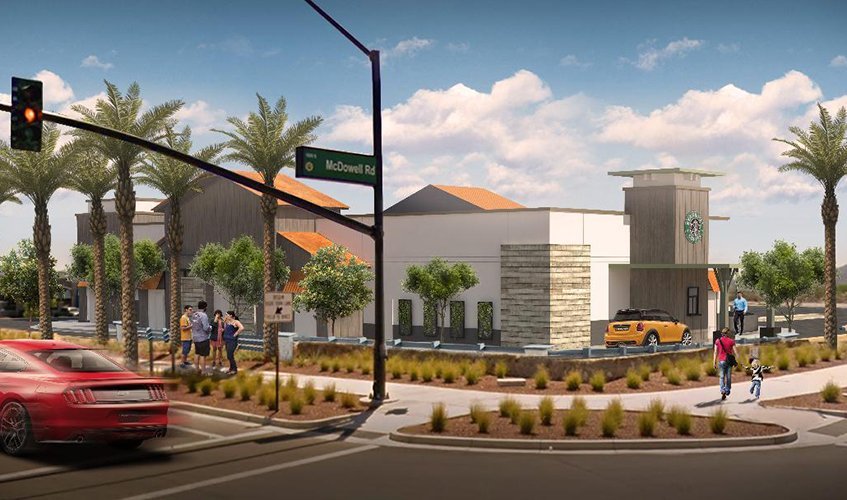 Verrado’s commercial service offerings continue to expand to meet the growing needs of our community and the greater region.

In the coming months, Verrado will see service expansion at our Marketside District, the 60-acre mixed-use district at the I-10 and Verrado Way entry to our community; and also our Village Grove at Verrado.

In late 2017, Marketside Animal Hospital closed on an almost 1-acre lot in Marketside. The veterinary medical practice will be lead by Dr. Scott Duston, a native Phoenician who returned the Valley in 2012 to take over ownership of Agua Fria Animal Hospital; Dr. Duston also practices at North Star Animal Hospital.

Marketside Animal Hospital will round out the health and wellness offerings in the District, including:

On the food and beverage front, Verrado Coffee Company, Culver’s, and Corner Store conveniences with Valero fuel station will have some new neighbors.

Starbucks plans to open a drive-through location at the southwest corner of McDowell and Verrado Way. Taco Bell will open just north of Culver’s. And family owned and operated Barro’s Pizza is scheduled to open before the end of 2018.

And let’s not forget that construction is under way to open locally owned and operated and uniquely designed storage facility Dominion Self-Storage.

“Verrado’s Marketside District is a coveted location for businesses serving the greater West Valley,” said Mike Burke, Senior Vice President of Commercial for DMB, Verrado’s developer. “We are thrilled to bring these new commercial partners that offer high-demand services to the community.”

Future Marketside District development could include additional and complementary services and businesses such as restaurants, shopping, medical, hotels and residential units that will be developed over the coming years.

The district’s architectural character is designed to reflect the hometown feel of Verrado, while being more accessible to a larger market.

Fry’s has not yet released its opening schedule for their Marketplace storefront anchoring our community’s newest commercial center at the corner of Jackrabbit Trail and Indian School Road, Village Grove at Verrado.

Heartland Dental has secured land in Village Grove at Verrado and plans to open in 2018. In addition, Bailey Orthodontics plans to open an office in the near future.