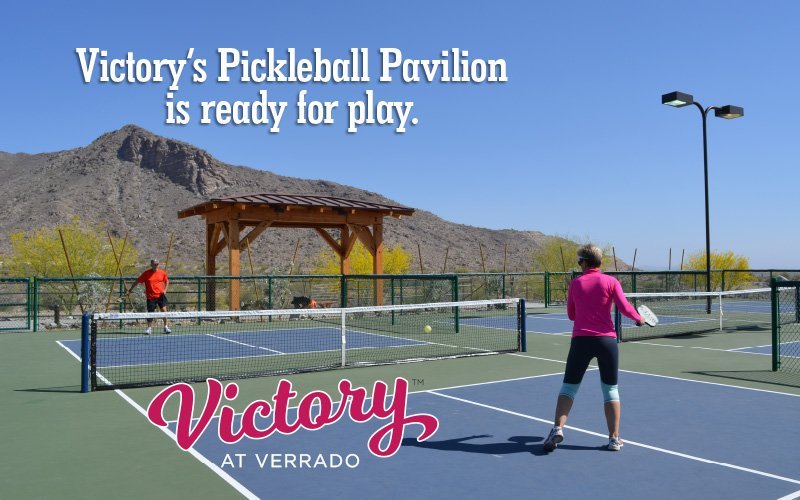 First we covered Pickleball 101 in our 55 Things to do series, then gave you the scoop on the 90+ member Verrado Pickleball Club and now we are thrilled to share that the Pickleball Pavillion in Victory at Verrado is officially open for play.

For those new to the game, this tennis, badminton and ping-pong hybrid is one of the fastest growing sports in the United States. The games popularity is exploding nationwide, with over 800 players participating in the first-ever US Open Pickleball Championships this week in Naples, FL – the largest tournament in the sport’s history. It’s a fast paced game that’s fun for all ages and ability levels, testing your agility, quickness and focus.

Florida isn’t the only place getting a piece of the Pickleball action though, as many consider Arizona ground zero for the game. In fact, the USA Pickleball Association (USAPA) Nationals Tournament is held in nearby Casa Grande, and the USAPA is located right in Surprise.

As impressive as some other facilities may be, we think the Pickleball Pavillion at the Victory Club is pretty hard to beat. With brand new courts set nearly 100 feet above the valley floor overlooking Verrado & Victory (and the beautiful White Tank Mountains in the background), it is the perfect home to Victory Pickleball players looking to have fun, hone their skills, or make a run at the Open Championship.  Victory residents have embraced this new amenity with verve, challenging one another to spirited matches almost every day of the week!

With the pavilion now officially open it’s the perfect time for you to get a first hand look at the facility, so be sure to join us for a tour of The Victory Club any day at 10:00am, 12:00pm or 2:30pm.

If you have questions about Pickleball or the Victory Club, just email AskVictory@Verrado.com and we will get you in touch with the right person. For coverage of this week’s US Open Pickleball Championships and other incredible highlights, check out the Pickleball Channel here on YouTube.

See the Homes at Victory Here

Read more on the Verrado Blog